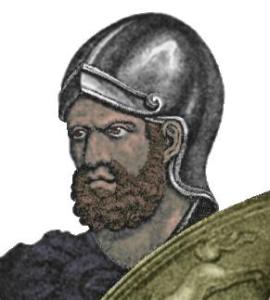 “I will either find a way, or make one.”

Hannibal Barca was a Carthaginian General known for the ingenuity of his military strategy, and the effect of transformational leadership he had on his men. Despite a vastly outnumbered army, he consistently defeated Rome at its peak of power, throughout the stages of the second Punic War, remaining undefeated until the Battle of Zama.

At the Battle of Cannae he decimated over 70,000 of Rome’s elite, taking the rest captive. In this battle his small mercenary army was half the size of Rome’s.

Modern military strategists still marvel at Hannibal’s leadership and strategy; his name litters ancient texts and he’s regarded as one of the greatest generals who ever lived. But what was his secret? What ability did he have that propelled him to the pinnacle of leadership?

“Brainwash” Yourself to Fulfill Your Vision

“Many things which nature makes difficult become easy to the man who uses his brains.”

Hannibal’s father passionately hated Rome, to the point that he made his son swear an oath on an altar to hate Rome and to use steel and fire to destroy it. This was the beginning of his cult-like mindset.

Individuals like Hannibal – Alexander the Great, Genghis Khan, Nicola Tesla – anyone who ever achieved anything of lasting importance – were staunch extremists. They were uncompromising, unbreakable, and overachieving.

Hannibal had a life calling, and after 17 years of military training, he set out to accomplish his giant vision to conquer Rome. During these years he filled his mind with strategy, thoughts, emotions, and goals that revolved around the annihilation of Rome. He literally brainwashed himself.

Hannibal had direction. He had guts, strength of mind, and determination. But there are a lot of people with determination and direction – but how many of them can say that they were able to win the minds of thousands, and convince them that their vision was worth risking their life for?

How did he command so much respect from these men? How did he convince them to share his vision and pursue it with their lives?

He believed in his vision, and was able to help them realize their own vision through his own.

The men he commanded were mercenaries. Nations rarely hire mercenaries these days because they lack loyalty – they fight for money, not for their country, or their organization. They don’t fight because of patriotism or for valor – they fight for themselves, and when push comes to bullets whizzing by their heads, many of them resort to self-preservation. It’s clear that mercenary troops can be used effectively, but not without leaders like Hannibal. He inspired them. He instilled an undying loyalty in their hearts and minds.

They followed him across the sea, and through the nearly impassable mountain trails of the Alps, to risk their lives against the most elite and powerful  army of that age.

They followed him against armies twice their size – and they won.

Use Your Vision to Gather a Loyal Following 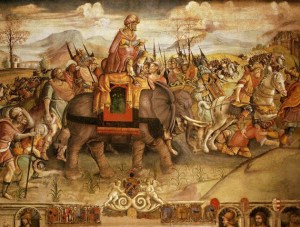 “I am endeavoring that others, in their turn, will be obliged to yield to my good fortune, and my valor.”

Humans are hardwired to belong to a community, and have an innate desire to believe in something or someone.

Like Hannibal, if you have a life vision you will inevitably attract a group of loyal followers, and in order to maintain your following, you have to integrate these tactics for success:

The main takeaway of this case study is to develop your own vision to the point that you can believe nothing else, then gather a following of like-minded people who can fulfill their own purpose through yours. In leading this group, you must be able to demonstrate your value as a leader by showing that you’re vital in the fulfillment of their vision – and that you’re willing to do everything they do and more to accomplish those goals – without getting on a high horse and playing chief; that’s what transformational leaders do. 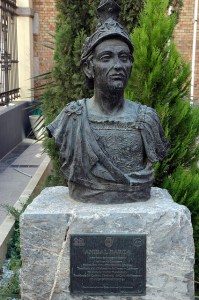 Like Hannibal’s Leadership? Read his thoughts and sayings in “Quotes of Hannibal Barca”!