In an earlier post I told a story in which I lost $12 worth of spinners and spoons (it was probably closer to $20 now that I think about it) on a single fishing trip. Sadly for me, this was not much of a shock – I lose lures ALL THE TIME.

But that trip pushed me over the edge – losing one lure worth $6 is bad enough, anything over that is asinine. So I had to either stop losing lures (which for me means no more fishing), or find a way to find or make lures that don”t scalp my bank account.

And that’s how my minimalist quest for inexpensive, easy to make, DIY fishing lures came to fruition.

How to make a Fishing Spoon out of… a Spoon

One of the things fishermen tend to miss out on when they make their own lures is fancy designs and patterns. Why we want our lures to look pretty is beyond me – the fish don’t care about how it looks, as long as it shines and moves like a shad or minnow – they’re color blind, remember?

But as much as you may hate to admit it, fishermen like finely crafted lures with nice paint details, engravings, all of the above. When I first started the homemade fishing lure series, I was a little disappointed with my results – the lures worked just fine, but the aesthetics were less than amazing, to say the least. But there’s ways around that.

1. Find and buy a set of inexpensive spoons: I found a set of 4 spoons on Amazon for $6 with shipping factored in, and I’m pretty sure it’s just as cheap or cheaper at Wal-Mart. If you google “Rose Bloom Collection Teaspoons” you may find an even better deal, and I’m sure if you really get into making your own spoons, you’ll find outstanding deals when you buy in bulk.

Back to looks – it’s a basic, inexpensive set of spoons, but the details are great – here’s a couple pictures to give you an idea: 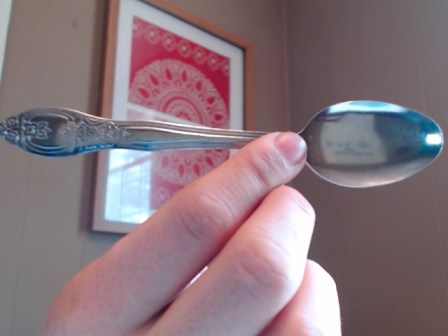 This is the best spoon set I’ve found so far, price and lure-friendly aspects considered. 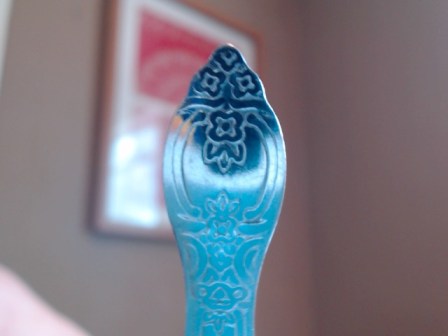 I’ve already made a spinner out of this section of the spoon, which is by far the best lure I’ve made so far – I’ll add a post on it later on.

2. Clip and shape with tin snips, and sand down the edges if you feel so inclined: Snips may not be enough for high quality metal, but the spoon set I found had soft enough metal to shear with tin snips. If tin snips don’t do the trick, pull out the hacksaw! 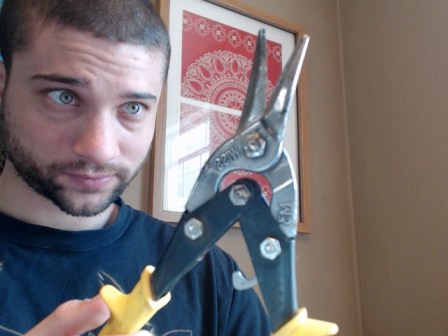 These tin snips worked great, but people usually use a hacksaw, then sand down the edge.

3. Drill holes in both ends – one for the hook, one for the line: This can be a pain, but putting a piece of solid wood underneath the spoon as you drill helps a lot. The metal gets VERY hot, so be careful. 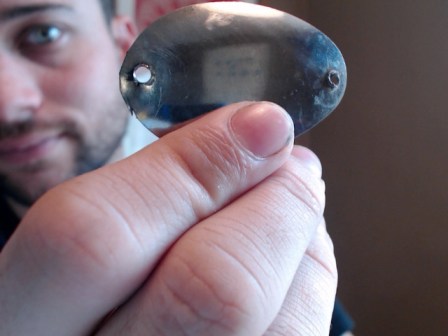 This was my first one – it’s a little gritty; I’ll have to sand it down later on.

4. Attach the split rings and hook: And for all functional purposes, you’ve created a highly effective trout or pike spoon, depending on it’s size. You can leave it as is, and it will catch plenty of fish, or you can paint it with fingernail polish, which is durable and waterproof (unless it says on the back it isn’t). If you’re feeling fancy you can airbrush a nice design on it, or use reflective stickers.

This is what the final product should look like, with a bonus idea for another nice homemade fishing lure (the link takes you to another great spoon-making how to from Winston Foster) : 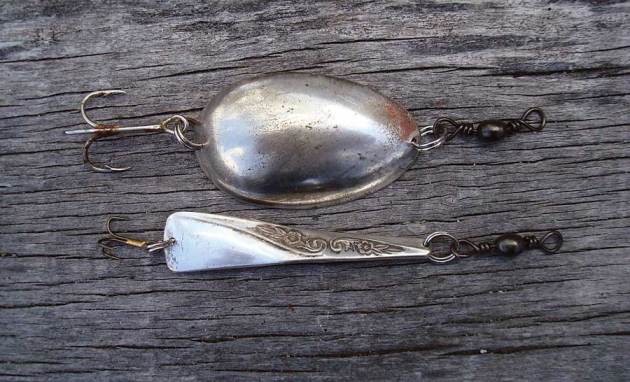 So overall it’s only $1.50 per spoon – tack on another 50 cents for a nice treble hook, finger nail polish (it works), and split ring and VOILA – you’ve got yourself a sturdy, nice looking pike/trout spoon!

This lure is highly effective, and you can fool around with the action by shaping it with a hammer – you’ll find that different patterns of action work better than others.

To give you an idea of how cost effective this idea is, look at the spoon/spinner material below – this is all from one spoon:

That’s 4 nice looking fishing lures (spoon, jigging spoon, or spinner) out of a single spoon that cost $1.50. Not too bad in my book. Well I hope this gives you some good ideas for your homemade fishing lures – good luck fishing!