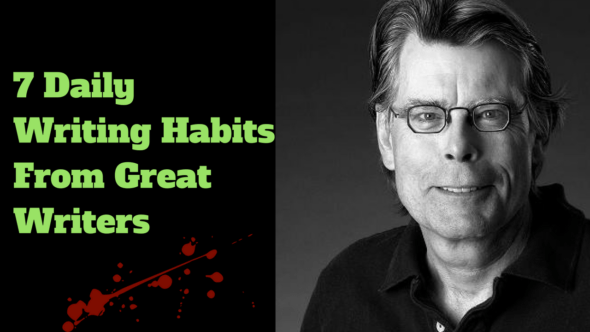 Some of the greatest writers only wrote standing.*

Some, like Truman Capote and Mark Twain, wrote laying down in bed.

Capote told an interviewer, “I can’t think unless I’m lying down, either in bed or stretched on a couch and with a cigarette and coffee handy,” and Twain’s report is only slightly different:

“Just try it in bed sometime,” he told the New York Times in 1902. “I sit up with a pipe in my mouth and a board on my knees, and I scribble away. Thinking is easy work, and there isn’t much labor in moving your fingers sufficiently to get the words down.”

I’m always looking for a working habit that makes me motivated, organized, accountable, faster, more prolific — you get the picture.

My favorite method of discovering new writing habits is to read biographies of great writers.

Here’s a few of my favorite writing habits, I hope they help you!

Writing Habits From the Greats

First, keep this in mind.

Some writers like to write a number of words or pages every day, while others feel lucky to squeak out a few phrases.

Some people write for hours while others organize their thoughts meticulously on index cards before they even touch the keyboard.

There’s no “perfect fit” when it comes to writing habits, so test and adopt the one that works best for you (and let me know in the comments!).

1. Truman Capote. The author of Breakfast at Tiffany’s

and In Cold Blood

claimed to be a “totally horizontal author.” He would write to the bed or lie down on a sofa, with a cigarette and a coffee. For the first few hours, the tea led to the coffee then the sherry to martini. He wrote his first and second drafts in pencil. Then still in bed, he took them back to the typewriter sitting in balance on his knees.

2. Philip Roth. One of the greatest living American writers, Roth writes standing and thinks walking. He claimed to walk a half mile for each page written. That’s around 8 or 9 football fields per page.

3. Vladimir Nabokov. The author of Lolita

and Ada or ardor: Family history

wrote standing, and he wrote everything on cards. That allowed him to write non-sequential scenes, and above all to reorganize his plans as he wished. His novel Ada or the ardor took more than 2000 cards.

4. Stephen King. In his book Writing: Memoirs of a job, Stephen King says he writes 10 pages a day, every day, even on public holidays. This mountain of daily writing has led to incredible results: King is one of the most prolific writers of our time.

5. Ernest Hemingway. On the humbler side of the coin, Hemingway wrote 500 words a day. He worked early in the morning to avoid the heat and write in peace and quiet. Here’s an interesting fact: Some people attribute the quote “write drunk, edit sober” to Hemingway. While he was an alcoholic, Hemingway said he never wrote intoxicated.

6. James Joyce. In the pantheon of the great writers of the last century, Joyce occupies an important place. And while the most prolific writers set a limit of words or pages, Joyce boasted of taking his time with every sentence.

A famous anecdote also runs on this subject. One day, Joyce crosses one of his friends in the street. He asks if he has had a good day of writing. And Joyce said yes very joyfully. That day he had written three sentences!

7. Joyce Carol Oates. This extremely prolific writer’s work can be read in her bibliography and she’s won many awards including the National Book Award.

She writes by hand, and prefers to write in the morning before breakfast. Joyce Carol Oates teaches writing, and on course days she says writing a good hour before leaving for her first teaching hour. On other days, when the writing goes well, she can work for hours without interruption and doesn’t eat breakfast until 2 or 3 pm.

So there you have it.

Those are some unique writing habits that have worked well for some of the greatest authors in the world.

The important thing is to find and adopt the writing habits that suit you best.

If you feel your motivation decline, try switching it up with a new habit from the list above!

Hope you have a great day, I’ll see you in the next one (:

Bonus writing habit: Dan Brown, author of The Davinci Code, writes after hanging upside down for awhile. He calls it inversion therapy (and apparently, he’s not the only one).